Welcome to the Max !

We are celebrating our 25th season of great indoor golf in Ottawa.

Come on in and enjoy the same fun and comradery with your friends as you do outdoors.

Whatever happens “out there”, happens in here at Golfomax.

Following government and public health guidelines, we closed the business for the season effective March 16. We will re-open next October. We hope you and your families stay safe through these difficult and uncertain times.

Note that our 25th anniversary golf tournament originally scheduled for June 26 at Eagle Creek has been postponed to Friday Sept 18. We look forward to connecting with many of you then.

For those of you that have your clubs in storage here, please email us to arrange a date and time to pick them up. info@golfomax.com

We look forward to seeing you all again in the fall.

Thank you for the fun times over the season here at the Max.

Dru, Jeff, JR and the gang.

MULTI GAME PASSES: Buy a 10 game pass and get 2 rounds FREE!!! Note: our multi-game passes are not transferable.

HAPPY HOUR: Weekdays between 4 and 7pm. Play or practice for one hour with a pint of domestic beer for $25. (If pop or coffee $22.) Reserve up to one week in advance only. Not available for groups of more than 6 people.

Traffic jam at the Max. 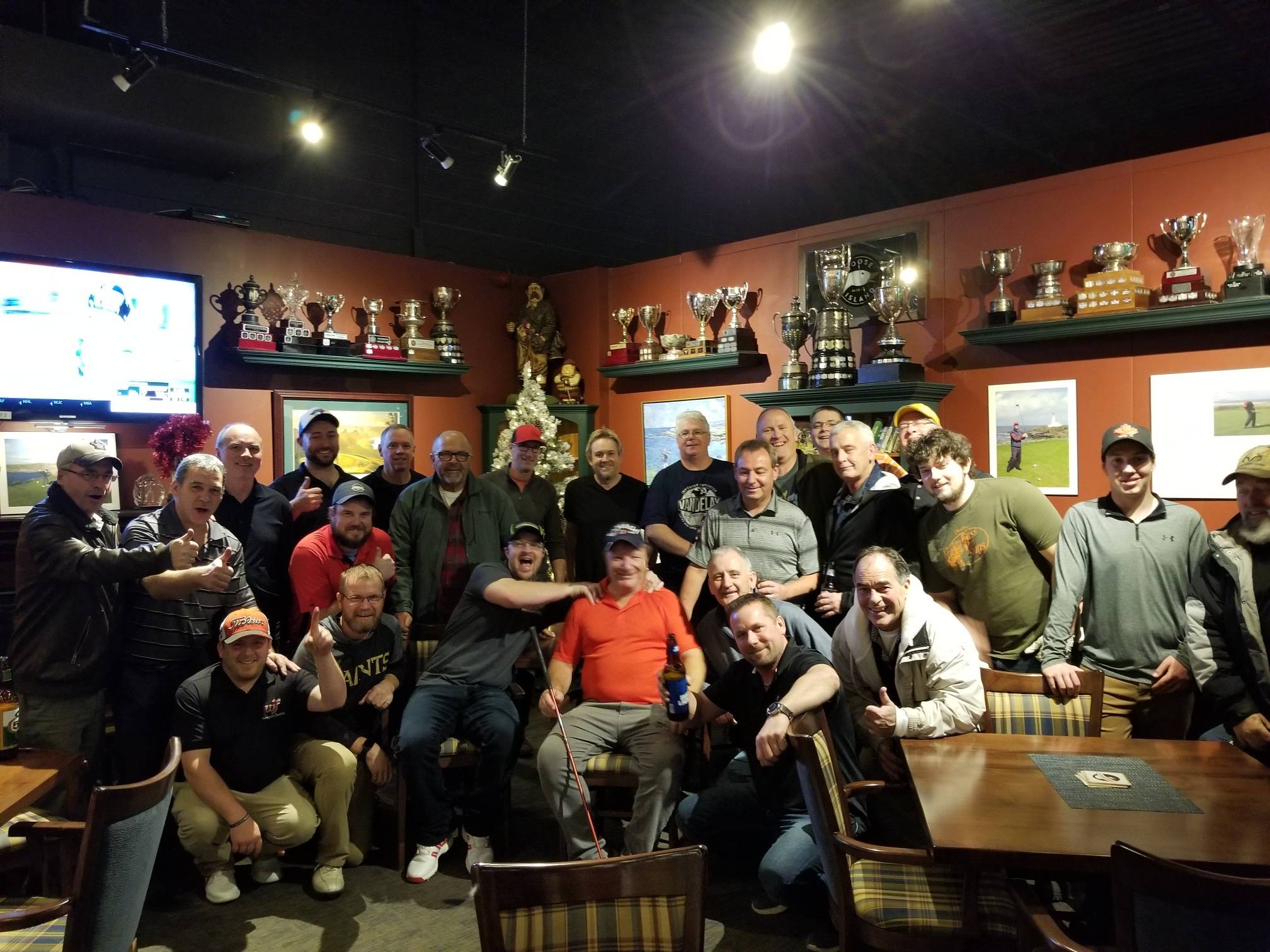 Group of golfers posing after their rounds on Dec 27, 2019 in our Trophy Lounge. Celebrating life of good friend and brother Kevin Bowie, retired Ottawa Police officer who passed away Dec 13. Kevin caddied for Owner Dru Lafave at some of his Provincial and Canadian Senior Championships. 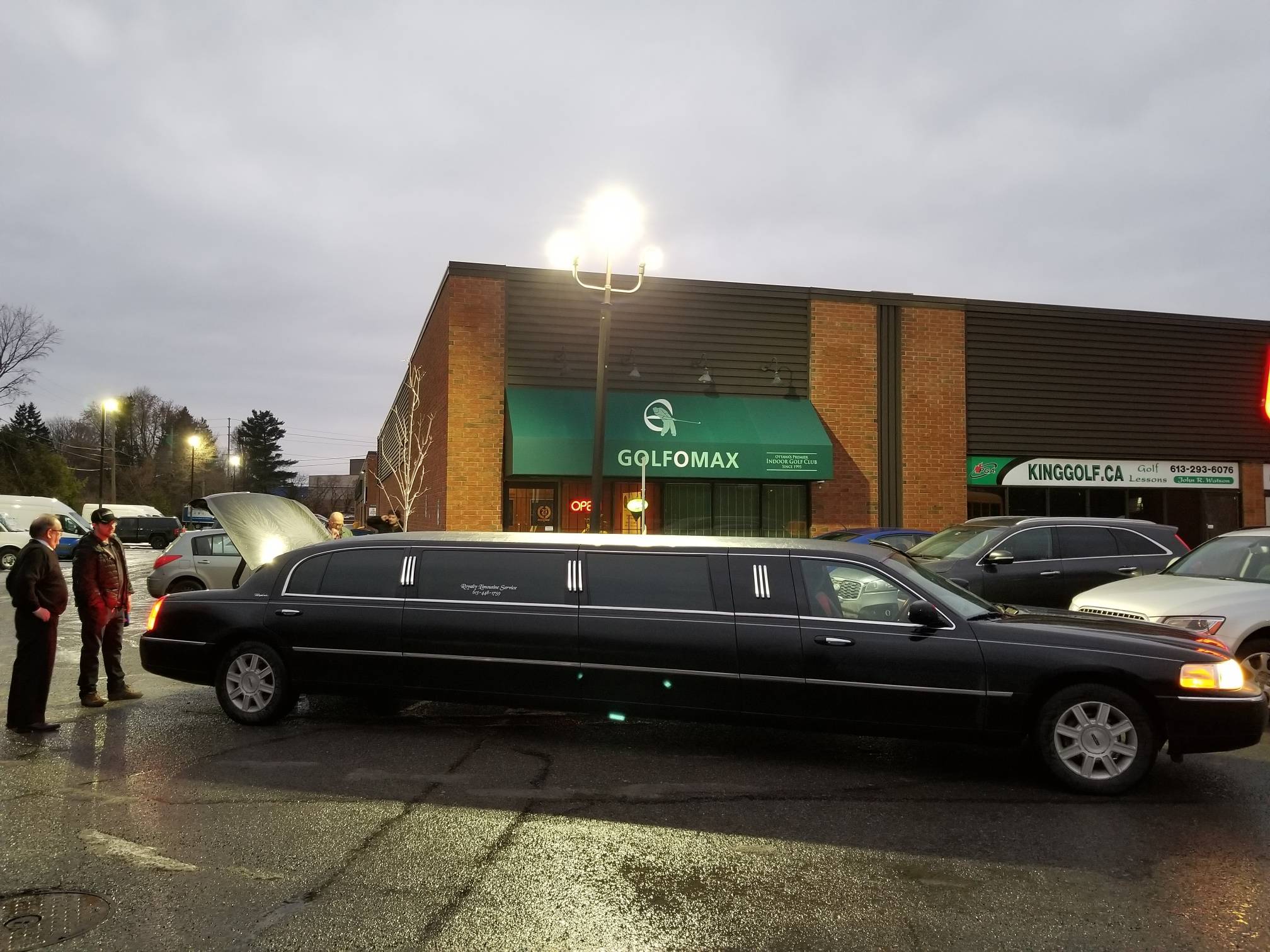 FULL SWING IS THE OFFICIAL SIMULATOR PARTNER OF THE PGA TOUR.

Brooke Henderson, Canadian golf super star, has joined on with Full Swing Golf. ” As my career has elevated, so has my need to have the best training technology available. Full Swing’s accuracy and reliability are second to none, and I know their products will help me as I prepare for golf’s biggest stages.” Brooke visited GOLFOMAX a few years back. After a visit she emailed us. “Enjoyed my time at Golf-O-Max tonight. Thanks again. 🙂 Brooke”. Maybe that experience led her to choose Full Swing.

Tiger Woods, who just won his 15th Major Title at the Masters in April 2019, uses Full Swing Golf. Following his win of the Tour Chamionship in September 2018, he stated “Consistent practice on my Full Swing Pro Series simulator was important to my return”.

Jordan Speith, 3 time Major Champion, PGA Tour Player of the Year and FED EX CUP champ uses our simulators. “The Full Swing sim is the closest thing to being out on the course.” See video link here.

Jim McLean, renowned golf instructor. “The Full Swing Golf Simulator is the most impressive indoor system I have ever seen for teaching, practicing or playing this great game.”

While you are in playing or practicing, if you have a question about your swing, or some other part of your game, our PGA Head Pro John (JR) Watson, or other members of the staff will be happy to help.

April 26, 2019, avid golfers played at the Max, and their efforts resulted in raising $50,000 for the University of Ottawa Heart Institute.

April 2019: Dru Lafave is the new Tournament Chairman of the Ottawa Valley Golf Association. “My primary focus will be to help grow the level of participation in all the OVGA tournaments in the region.”

GOLFOMAX is a proud sponsor of amateur golf in the Ottawa region.

Congrats to the winners of the inaugural OVGA Cup held at Kanata Golf Club Sept 22, 2019. The top players in the Mens, Senior Mens, and Womens divisions earned their way into this new prestigious event.

Congrats to all the 2019 Ottawa Sun Scramble qualifiers, who also received a free round of golf at Golfomax.

Congrats to all the participants in the OttawaGolf Million Dollar Shootout held at the Meadows Sept29, 2019, who also won a free round at the Max.

GOLFOMAX celebrated it’s 20th anniversay with a Charity golf tournament on June 1, 2015 at Kanata Golf Club. Many thanks to all our prize donors and sponsors, our volunteer staff, and all our participants. Together we raised $14,000 for the Childrens Hospital of Eastern Ontario (CHEO) and the Ottawa Childrens Treatment Centre (OCTC).

136 avid golfers, many of whom are regular Golfomax patrons, participated in a 4 man Texas Scramble. Golfomax staff were on hand at all the par 3 holes to help out with an additional shot for each team. Congrats to the winning team, captained by Steve Murray with playing partners Eric Cormier, Cody Barbeau and Stu Muir.

With our 20th milestone season, we granted one of our longest playing patrons with an honorary lifetime membership. Mick, a member at Hylands who is now 87 years young, has been playing at the Max twice weekly since we opened in 1995. He has probably played more rounds of golf and drank more coffee than anybody else. After his rounds, he enjoys his usual pint in the lounge with his buddies, telling tall stories about his golf game and past career in the Navy.

Mick joins Lloyd Swick, another long time patron who unfortunately past away recently at the age of 94. Lloyd was given an honorary membership in 2012, in part because he was a very sweet guy and always keen to work on improving his game. This was also in recognition of Lloyd being the driving force behind the War Animals Memorial unveiled at Confederation Park in November 2012.

Copyright © 2017 Golf O Max. All Rights Reserved.
You can login using your social profile
Install social plugin that has it's own SHORTCODE and add it to Theme Options - Socials - 'Login via Social network' field. We recommend: Wordpress Social Login